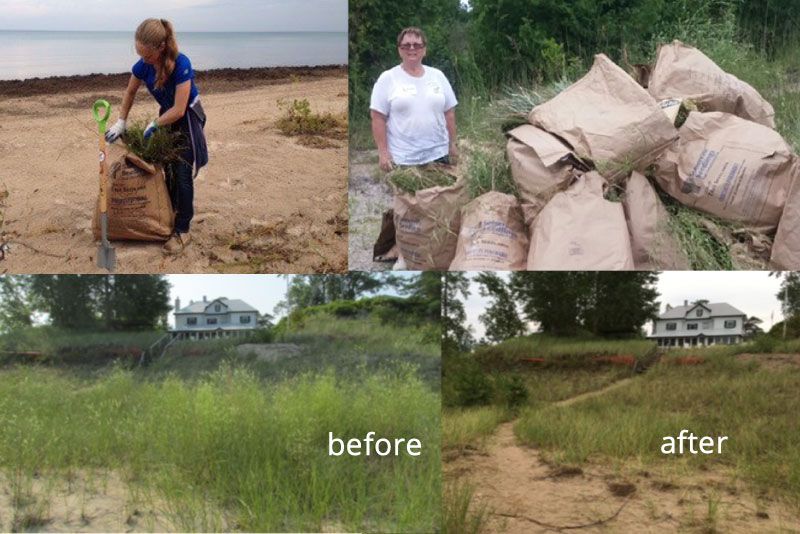 before and after pictures

On August 11 a team of 38 volunteers came to the beach for Ipperwash Phrag Phighters (IPP)’s Phrag Spading Day. Volunteers included members of the community, Ministry of Natural Resources and Forestry rangers and students, the St. Clair Region Conservation Authority, the Lake Huron Centre for Coastal Conservation, the Lambton Shores Phragmites Community Group, and the IPP members. The team spent 6 hours removing Phragmites and white sweet clover from the dunes along a 2.7 km stretch between West Ipperwash Road and Army Camp Road in Lambton Shores.

Phragmites are an invasive shoreline plant, which forms dense monocultures crowding out native vegetation. The plants spread by seed and by rhizome, even if only a small piece of the plant remains alive, it can regenerate. Consequently, Phragmites can cause immense damage to biodiversity and wildlife habitat as well as impact recreational activities.

Volunteers used a “spading” technique to remove Phragmites plants. Individual plants were spaded on a 45° angle at their base, splitting the plant from its underground rhizome. The plant stalk was removed and the soil was left undisturbed. Phragmites thrives in disturbed soil; by leaving the soil undisturbed, Phragmites will re-establish at a slower rate, giving native species a better chance of re-establishing.

Volunteers also tackled another invasive specie that has been invading the dunes and shoreline habitat: white sweet clover. White sweet clover (Melilotus albus) out-competes native species by releasing a chemical through its roots into the soil; this chemical prevents the growth of native plants. Additionally, each plant can produce 350,000 seeds, which can remain viable in the soil for up to 80 years! Volunteers pulled and bagged white sweet clover plants.

The spaded Phragmites and pulled white sweet clover were bagged separately and collected by a Kubota provided by St. Clair Region Conservation Authority, 65 bags of invasive plants were collected with a Kubota so the volunteers could focus on removal. An additional eight garbage bags full of trash and five bags of recycling were also collected. The Parks and Recreation Staff of the Municipality of Lambton Shores collected the bags for disposal.

Volunteers were treated to a well earned BBQ lunch, provided with funds donated by the Centre Ipperwash Community Association. Monitoring of the beach and dunes will be ongoing. It is hoped that all lakefront property owners will take an active role in keeping their properties free from the regrowth of these invasive plants.